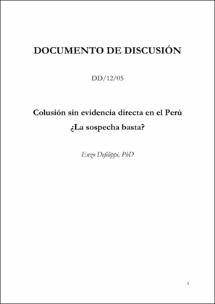 In the largest antitrust case prosecuted in Peru during the 2000s, the competition authority fined three firms for colluding to supply oxygen to Social Security hospitals (ESSALUD). At first the case looked simple: between 1999 and 2002 these firms won tenders in the same geographical areas in processes where the other two bidders always disqualified themselves. Moreover, this is an industry with a history of anticompetitive practices, since producers of industrial and medical gases have been found guilty of collusion in several countries, including Brazil, Argentina, Chile and the European Union. However, a deeper look at the economic evidence of the case shows that it was not conclusive, since the collusion hypothesis cannot explain key facts: the reason for which the firms disqualified themselves, since the others did not require it to win the tenders; the reason why the firms would maintain a collusive agreement that could not provide higher benefits than competition; and the price evidence that shows ESSALUD was exerting market power at the same time it was the supposed victim of a collusion. Likewise, the collusion hypothesis implies that the behavior of the firms was irrational, since i) a producer representing 85% of the market colluded with two firms representing 10% and 5%, ii) to allow them to gain market share at its expense, iii) to sell the product at increasingly lower prices than those paid by the rest of buyers, iv) through contracts obtained bidding the lowest possible price. This paper argues the collusion could not be proven and thus, the case should have been dropped.